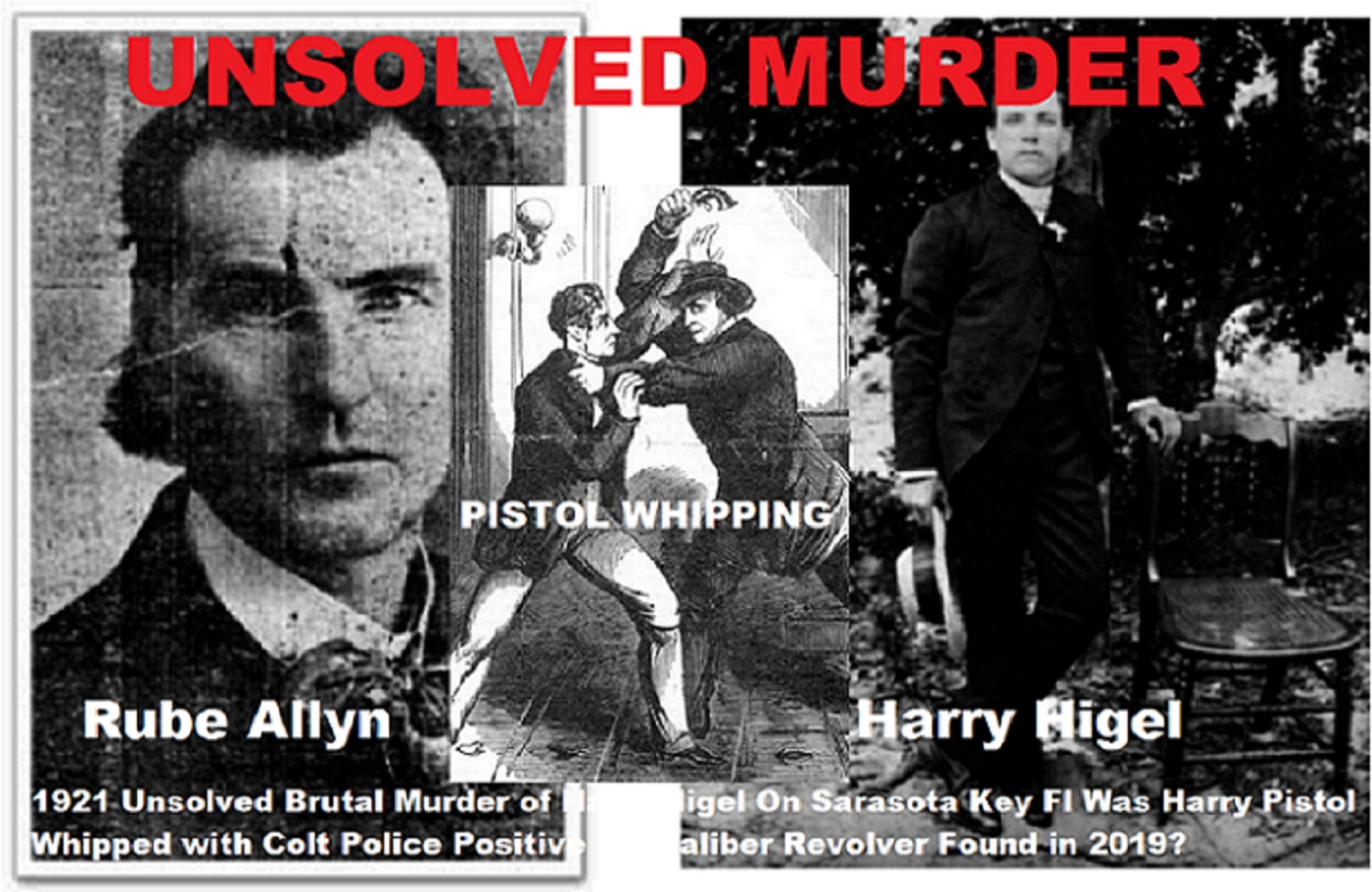 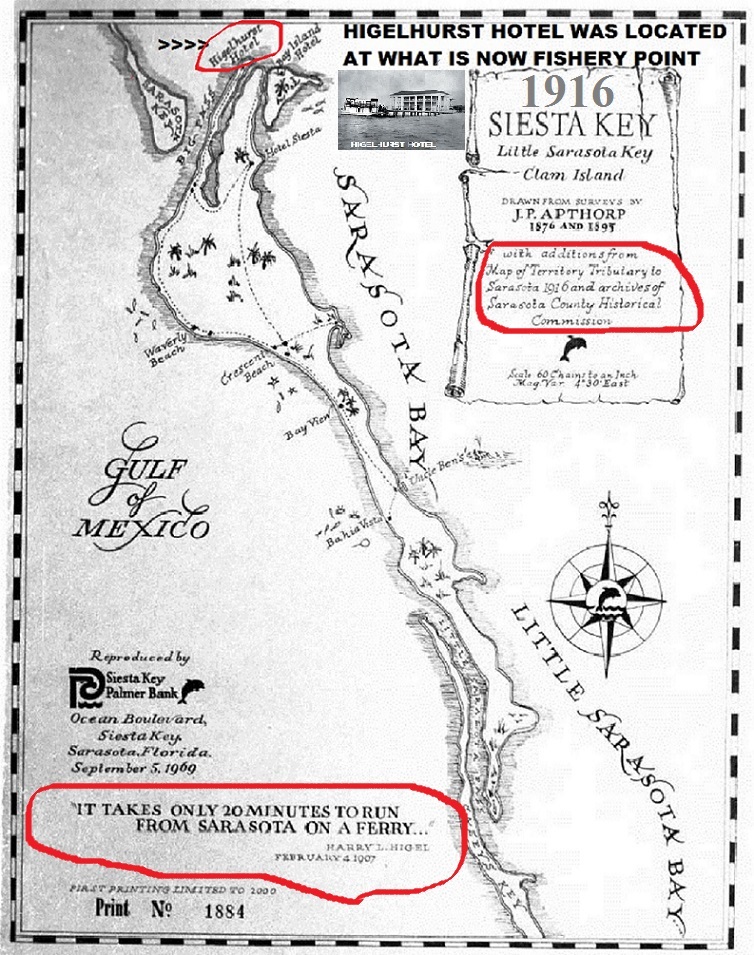 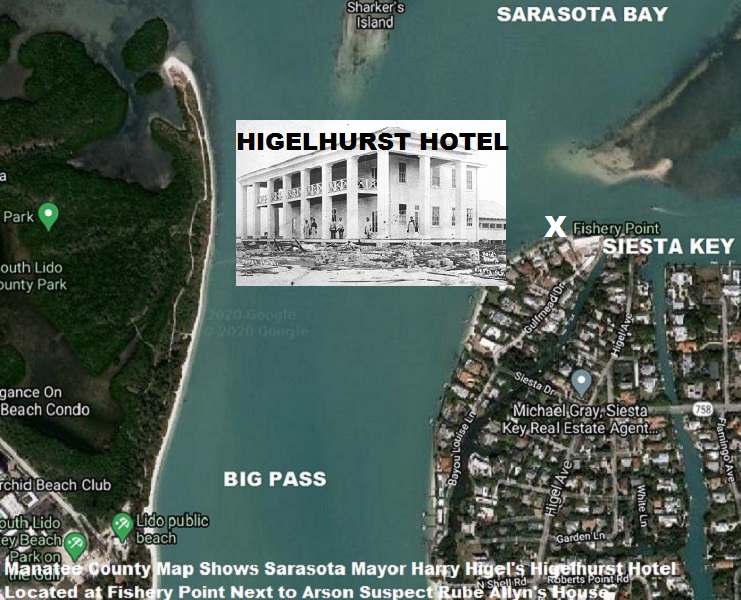 Newspaper articles about the Higelhurst Hotel on fire March 30th, 1917 told of how Harry Higel was standing on the Bayfront where Marina Jacks is now and tears where running down his face as he watched his magnificent Higelhurst Hotel at the very north end of Siesta Key burn to the ground. A month later in April 1917, the north bridge to the key was completed, which may have allowed enough time for the fire department to save the building. Rube Allyn was there on the north end of Siesta Key in the early morn of Friday March 30th 1917 when the Higelhurst hotel was torched. Rube Allyn was also the one and only suspect in the brutal pistol whipping of Harry Higel on the north end of Siesta Key on Friday morn January 7th, 1921 that led to Mr Higel's death. Rube Allyn was arrested but a "kangaroo Grand Jury" made up of Rube's newspaper pals and drinking buddies, failed to indict on March 10th, 1021. 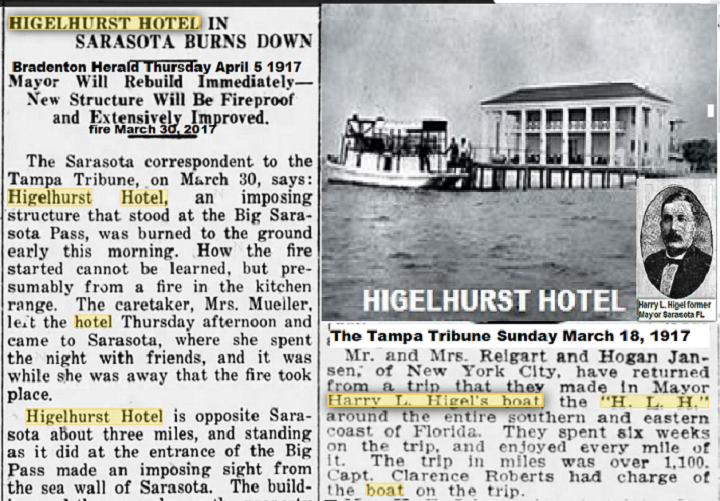 Harry Higel's Hotel HigelHurst on Siesta Key opened its doors on March 9, 1915, with more than 200 people attending the grand opening reception. Since the bridge to the key was not finished, ferry boats provided transportation to the hotel. The Hotel was burned down on Friday morn March 30th 1917, Rube Allyn was a person of interest in the arson. The caretaker Mrs Mueller left the Hotel on Thursday afternoon March 29th 1917 for Sarasota where she spent the evening with friends. The Hotel was empty and vacant, Rube Allyn lived nearby and hated Harry Higel. Rube was there on Siesta Key in the early morn of Friday March 30th 1917 when the hotel was torched. The Higelhurst Hotel on N Siesta Key was overlooking Big Pass with an unobstructed view of the Gulf of Mexico directly across from Lido Beach. The Higelhurst Hotel was on the beach less than 50 yards to the Big Pass waters. The very north end of Bayou Louise was behind the  Higelhurst Hotel. 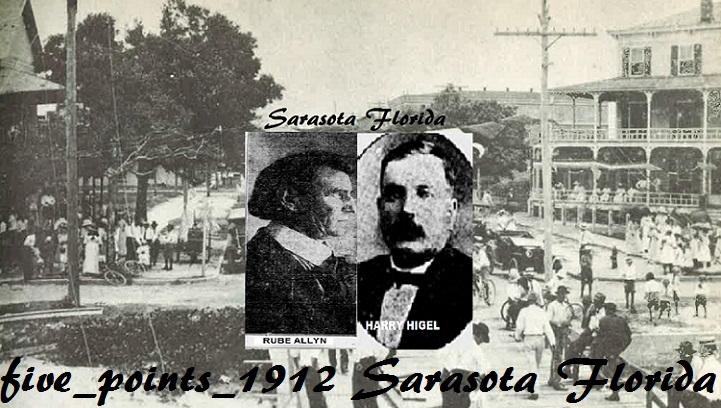 In Sarasota Rube Allyn hated 3 time Mayor Harry Higel, he could never beat him. Siesta Key was sparsely populated from 1917 to 1921 only about 40 people lived there full time. When Harry Higel's Higelhurst Hotel burned to the ground (arson) on Friday morn March 30th, 1917, Rube Allyn was there and living nearby on the north end of Siesta Key, he was a person of interest. 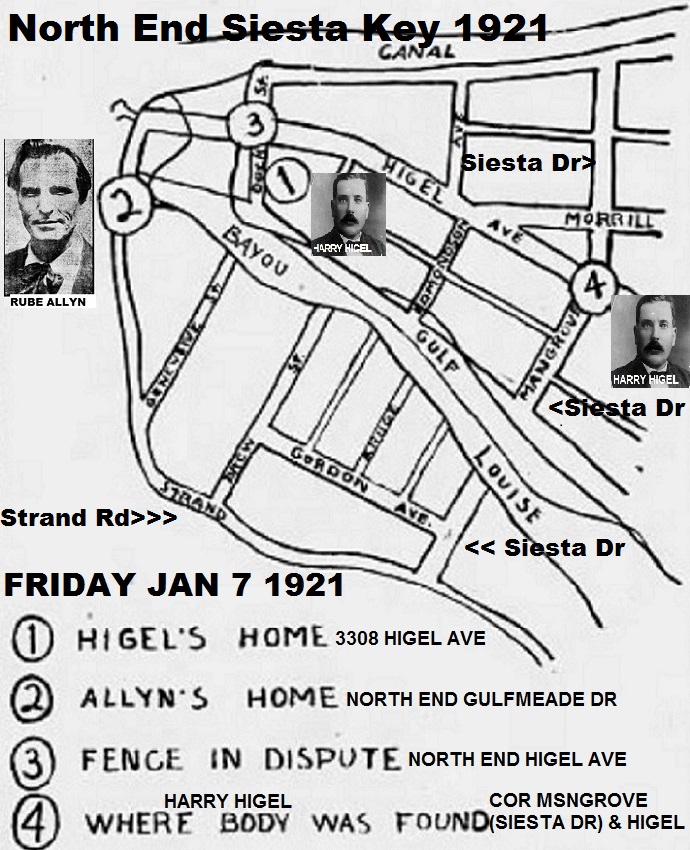 photo credit screenshot tampa tribune newspaper Jan 1921
Some time after Feb 1913, Rube Allyn Sr his wife and 6 children moved to Siesta Key from Palmetto and made a home in the old Sarasota Yacht Club building on the north end of Siesta Key on what is now Gulfmead Dr across Bayou Louise from Harry Higel's home on Higel Ave. Rube Allyn Sr had purchased his printing press from the White Springs Messenger (on credit) and moved it into the building at the end of a dock off North Gulf Stream Blvd Sarasota and later he moved the newspaper operation right next to Harry Higel's Higelhurst Hotel on Sarasota Key in 1915. 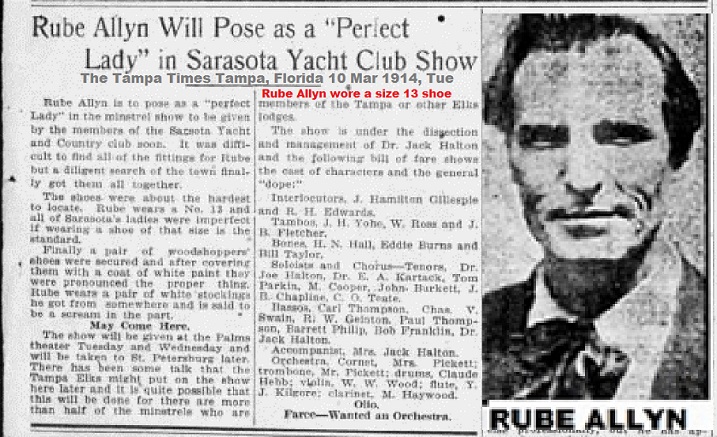 photo credit screenshot Tampa times newspaper.
The footprints, tracks in the sand near the body of Harry Higel at the cor of Mangrove and Higel Ave on Friday morn Jan 7th 1921 leading in the direction of Rube Allyn's house are very significant as Rube Allyn wore a size 13 shoe. Rube Allyn was a big man at 6' 2" tall with long arms and wore a size 13 shoe, he was much larger that Harry Higel who stood about 5' 7" tall and would have worn a size 9 shoe. Very few people lived on Siesta Key in 1921, at most 40 people lived there full time, there were only 2,100 people in the 1920 census in the City of Sarasota Fl. So how many of the 40 people who lived full time on Siesta Key wore a very big size 13 shoe Like murder suspect Rube Allyn when at least half of the 40 people were women. 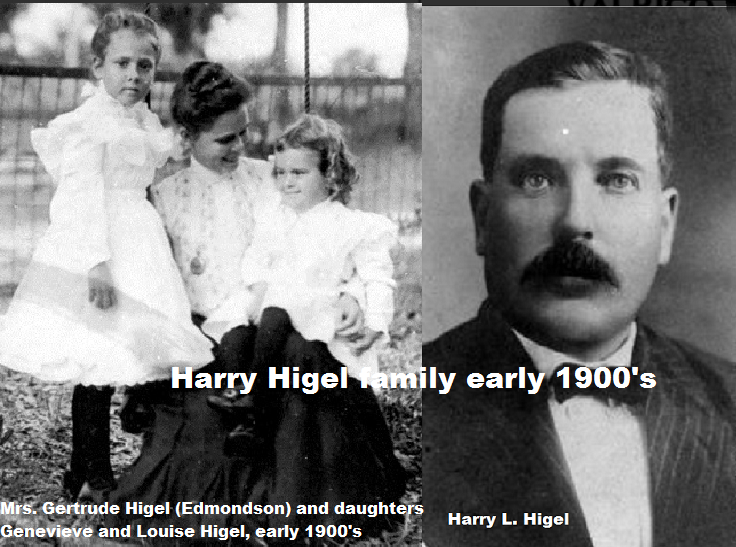